NEW YORK – This is going to be a fun article about something that doesn’t happen every day. Last night during the Giants vs. Jets game, I, @nygreporter (our twitter name) got on national TV during a LIVE football game. We were one of the lucky few who got aired because the Giants held a new program where if you added #GiantsGame to your tweet, you had a shot at making it on TV. If I cannot attend the Giants game, I will usually watch it at home and talk to fellow Giants fans on twitter about what is happening and give updates to those who cannot watch the game. The game was being broadcast locally on Channel 4 NBC New York but also on the NFL Network which expands across the entire United States. I will leave a screen shot below that was taken by a fellow Giants fan with the twitter handle @MrSoprano whom I cannot thank enough. I owe you big time for taking the time to do that for us buddy, you rock!

It was early in the 4th quarter when my tweet aired, just as the Jets were driving the ball deep into Giants territory. I was trying to rally the Giants fans to not give up hope and remember that it was still a close game (Jets were leading 7-3) with plenty of time on the clock (12:52 remaining in the game). The game had been a defensive battle up until this point and I could sense the tide changing and thought I would send put a positive message to spark the fans back to life. All of a sudden, I started getting tweets from fellow Giants fans and nygreporter readers saying they just saw me on TV. Needless to say I was very excited and very disappointed that I had missed it because I turned my back to reply to a Giants fan question. That is when @MrSoprano sent me the screen shot below and said Congrats, you were just on national TV. I even got an email directly from a little bird in the organization (thank you) telling me about it.

I’m sure most of you probably think this isn’t a very big deal and that is fine with me. You have to understand that we are just a small family friendly Giants website with no budget and we have been blessed to have a great deal of fortune bestowed upon us. We have been featured on the NFL Network (twice now), NBC New York, SNY Network, USA Today, Fox Sports, Giants.com (the old website), CBSSports.com, The Mike Francesa Show, Eisens Insight podcast (official Giants podcast) and dozens of other sports websites and shows across the country. We have also been fortunate enough to interview former Giants WR Steve Smith and RB Rodney Hampton. I cannot thank those in the Giants organization enough for the help they have given me and I still hold out hope to get a job with them someday soon. I will never waiver from our family friendly format and and I will continue to give you “on point” team analysis consistently. Thank you to our readers as well because without you, there is no nygreporter. 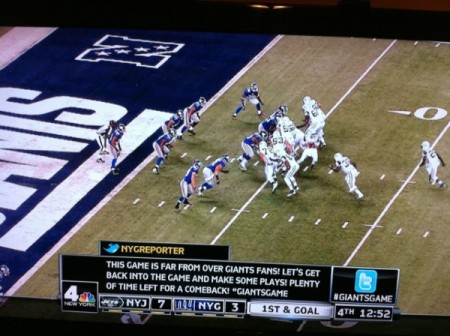