The NFL, in the annual owners meetings; this year being held in Dallas, voted today between Miami, Tampa, and New York as the host cities for the 2014 Super Bowl. As I mentioned yesterday, all indications pointed to the New Meadowlands Stadium as the victor and indeed it was. Reports indicate that Miami was eliminated for the discussion first and after four ballots New York came out on top. The real significance is that it will be the first outdoor cold weather Super Bowl and for that many doubters are upset. They do have a fair point, I mean could you really see David Tyree making the catch if the field was covered in snow? But, the game was designed outdoors in the bitter cold and for football purists everywhere this is indeed a victory.

There is no way to tell if this ruling will have any implication on the  future of the game as far as Super Bowl locations. Who knows maybe 2015 goes to Green Bay. My gut tells me this was a call made by the owners in an effort to show of the fruit of the stadiums owners Woody Johnson, John Mara, and Steve Tisch labor. It seems as though the league really wants to show off the brand new stadiums teams are building, and it could go along way to attracting bidders for the stadiums still not purchased naming rights. Either way, this is very exciting news for all three owners and nothing but good things can come of this. 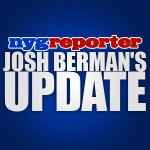 Well for this week Giants fans, I thought I’d show off a little of my hometown roots. By that I actually mean I’m going to show my disgust with the fact that the Philadelphia Flyers actually made it into the Stanley Cup. We don’t usually discus other sports here at NYGReporter.com but if you’re curious I am a Giants fan (duh), a Nets fan (unfortunately), a Devils fan, and a Yankees fan. To see the Flyers crush my guys in the beginning was hard enough, but there are so many band wagon fans down here that it is almost unbearable. To make matters worse, I have heard on several accounts how “similar” the Giants run to Super Bowl XLII was in 2007 to the Flyers run this year. I mean it is a little, the Flyers have key injuries the Giants had key injuries, blah blah blah. I don’t want to hear Philly fans compare themselves to Big Blue, unless of course they have a no-name guy head out on the ice and bounce the puck of his head and into the goal. Until that happens, the Giants will always be first and best.

In other more important news, reports are coming in that Justin Tuck, the Giants all-star defensive end, who was recently referred  to as the Giants best defensive play (commence arguing among yourselves) is doing great and the shoulder is feeling better by the day. Tuck suffered a torn labarum from an intentional trip by former Cowboy Flozzel Adams, and depending on who you ask, Tuck was playing at about 60% all season long in 2009.

Continuing with Tuck, the defensive end was somewhat vocal in questioning the Giants early picks in Jason Pierre-Paul and Linval Joseph, fellow defensive linemen. Since then Tuck has had a chance to see them do drills and really work out and he has changed his mind. He indicated that he was biased in his early opinions, but now acknowledges their incredible athleticism and welcomes them with open arms to the Giants family.

And now the news you’ve all been waiting for, the league will vote tomorrow as to whether or not New Meadowlands will host a Bowl in 2014, and looks as though chances are better than good. John Clayton of ESPN is even calling them 100%. Although it won’t be the first time in recent memory that a Super Bowl will be played in a cold weather city, it will be the fist time in a long time that it will be played outside. The game would be very beneficial to paying off some of the leftover financial obligations the stadium brings, and even maybe bring in some naming rights competitors. Overall I think it will be great for the city and really open up the game to any climate, as it should be. What do you think the back lash will be if it snows during the game in 2014 when being held at the New Meadowlands Stadium? Should be interesting!