Giants Need to Win Five Games Before the Bye Week 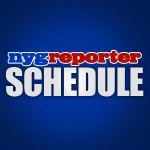 NEW YORK – I was talking about the season with one of our readers here and expressed how I thought the Giants needed to win five games before the bye week in order to make it back to the playoffs. Which pretty much means winning the next five games in a row. I am sticking by what I said and I truly think it is an important benchmark, because we all know the second half of the schedule is brutal. I understand that any NFL team can win on any given Sunday but this schedule is ridiculous. If the G-Men fail to win five of their first six games, I think there is a real possibility of becoming a 500 team or maybe even falling below the dreaded sub-500 mark. Fans can dilute themselves with pep talks but reality bites hard. Of course, I hope that none of this happens and Big Blue makes the postseason.

Giants fans will have to wait until the Monday Night Football game is over to find out if the team will start the season at 1-1 or 0-2. Everyone seems to assume that the Rams are an easy win for some reason. They have a pretty good football team in St. Louis and I hope I don’t have to remind fans about how easy a win the Redskins were. The Redskins kicked our butts all over the field last weekend in a game that fans chalked up as an early victory. Do not get overconfident and take each game week by week, until you start building some momentum. Face reality and understand that the Giants are in last place right now and need to battle out of the basement in a very tough division. After the bye week, the Giants schedule transforms into the toughest in the NFL in my opinion.

The Giants signed WR Brandon Stokley this week in an attempt to bolster their WR corps. I wish Brandon well and hope that he can stay healthy this year. He has only participated in 3 full seasons during his 13 year NFL career, which makes his signing suspicious considering the team has been plagued with injury prone players. He was clearly brought in to help out in the slot and to try and give Manning another Steve Smith type of WR. DE Justin Trattou was waived in order to make room for Stokley and WR Chris Hogan was added to the practice squad. I also question why so much emphasis is being placed on the WR position when the TE, CB and LB positions are clearly in need of some help. All we can do is sit back and have faith that GM Jerry Reese has a plan. The Giants play their home opener against the Rams on Monday night at 8:30 PM EST.

Do you agree with the title of this article? Do you think the G-Men need to win five games before the bye week?