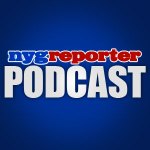 NYGReporter was representing on Tuesday, as we called into the Giants.com radio podcast “Eisen’s Insight LIVE” and talked to the guys over at the stadium. The show is hosted by Michael Eisen and John Schmeelk. I called in as “Robert from New York” and can be found at the halfway mark of the show. I asked the guys about safety Kenny Phillips’ injury status and how he is progressing. Michael Eisen said that he was coming along well but he will need to give it the final test on the field to really know for sure. He also said the team is being “cautious” about announcing anything definitive concerning Phillips. I’m sure that I am not the only Giants fan concerned about Phillips’ situation because he is one of the most promising athletes the Giants have. We all wish him a full and speedy recovery.

I also asked about RB Andre Brown (ruptured achilles) and CB Aaron Ross (hamstring) and how they were doing, after both had suffered injuries in 2009. Again, Michael Eisen said that both of them were coming along fine and that it was a good thing (as good as it can be) that Brown got injured last August, so he had time to fully heal. Eisen also mentioned that Ross will need to get on the field and see how the hamstring feels before he will know anything for certain. Aaron Ross plays a huge role in the Big Blue secondary and Brown was touted as a possible break out star when he was drafted in 2009. The fans certainly hope that both of these men will be good to go in 2010.

It was a brief talk during the podcast but I found both Eisen and Schmeelk to be good guys. I have followed their work for quite some time and had a lot of fun being on their show. I was going to ask if I could say a plug for NYGReporter.com but wasn’t sure if that would be a conflict of interest, maybe next time. Enjoy!

I will leave a link to the Giants Radio podcast below, so that our readers can listen to it for themselves. Remember to have the volume turned up on your computer when you click the link.