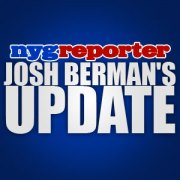 This week, the New York Giants began and completed minicamp activities. We here at the nygreporter, have gotten some excellent coverage from our very own Robert Domaine and already there are a lot of topics to cover. By far, the biggest story making headlines is the loss of WR Domenik Hixon for the season. Hixon tore his ACL during practice on the new turf of New Meadowlands Stadium. Hixon was not an intricate part of the offense, although he was second in the league last season in punt return average. The true story behind the story here is the safety of the turf. Safety Antrel Rolle and wide receiver Steve Smith both seem to believe the turf is to blame for Hixon’s injury, however GM Jerry Reese respectfully disagrees. Rolle claims to have seen the injury and remarked that Hixon “…didn’t make a cut or anything”. Smith thought the turf was “real slippery”, a sentiment Rolle also expressed saying, “I was slipping on each and every play”. Reese and Coughlin both expressed their belief that Hixon did not get caught on the turf and that “it could happen on any surface”. Either way, it will be a developing story to watch for the remainder of the offseason.

Osi Umenyiora has stated that he does not want to be a distraction in camp this season and that what has really been hurting is his pride. According to ESPN, Osi wants the best man to play this season. Osi, who was benched for the last four games of last season, spoke publicly about his unhappiness with his role in the team. Since then, Osi has gotten very quiet. I truly believe he and the rest of the defensive line, will have a good, productive, and effective relationship this season. If they can work together, the returning linemen and the new additions should be poised for a very good season, as Perry leads them back to an attacking pass rushing force.

Amani Toomer is still making headlines even in his retirement. Amani plans to run the New York Marathon this year; he will be running for the New York Road Runners youth program. Timex has sponsored Toomer, promising to donate 1 dollar for every runner he beats. Amani will be the first NFL player to run since Lynn Swan did so in 1993.

One final note, I was thrilled to see the Philadelphia Flyers lose the Stanley Cup. As I told you in my last edition, being close to Philly (as the city is affectionately called) is painful enough, but the comparisons to the Flyers’ post-season run to the Giants’ Super Bowl run was unbearable. Seeing a different outcome was a wonderful, and selfish, surprise.