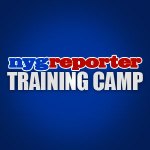 I had the pleasure of going to the New York Giants training camp today for the morning session. It was a cloudy morning but the rain never came. The Giants actually started their training camp yesterday but I was unable to attend because of a previous commitment I had made. But I was there today and it was a great experience. I suggest every single Giants fan within driving distance attend at least one and cross it off of your life list. If I were to guess, I would say there were between 500-750 fans at the morning practice today.

The day started in a pretty cool way too. A couple of buddies and I pulled into the parking lot and began walking towards the field, then we noticed a car pull in and park right next to us. Can you guess who it was? It was none other than Mr. John Mara himself. He looked like he was in a hurry, so I didn’t want to try and talk to him but it was cool to see him. So if you read this Mr. Mara, please except my belated hello and best wishes.

Next we walked to the fence surrounding the field, where we remained until the practice was over. Two things that I noticed about the practice was how vocal and involved new DC Perry Fewell is and the other was how natural LB Phillip Dillard appeared to be as a leader in the MLB spot. It was also good to see CB Aaron Ross and RB Andre Brown running around. The rest of the players who you expect to play well, did. I had a really clear idea of who I wanted to keep an eye on and those mentioned stood out the most. Kenny Phillips dressed for practice but did not participate.

The practice this morning was extremely loose and the coaches were in very good spirits. As elusive as the white rhinoceros, I may have captured a photo of Coach Coughlin smiling, I’m not sure yet. The players were practicing at a good pace that was set by the coaches and they hung out in the end zone while waiting their turns. The players were about 35 feet from where I was standing at one point during the practice, so I got a lot of good photo’s (No more concerns with using pictures on our site here, since I took them all myself) of the players and coaches close up. I took roughly 600 photo’s in all today. A lot of good action shots while the team worked on their drills.

Please be sure to come back and check out a new photo series, the first being posted is called “New York Giants 2010 Camp Photo Album”.